Former DMTC Director, Emeritus Professor John Norrish, has been made a Fellow of the American Welding Society in recognition of his distinguished contribution to the discipline.

The AWS is the peak body for welding and joining technology in the United States, with about 70,000 members industry, national research labs, universities and training organisations from the US and around the world.

Being elected a Fellow of the Society is a recognition of the distinguished contribution of individual members in the field of welding science and technology, in John’s case over more than 50 years.

Earlier this year John was also made a Fellow of DMTC, at which time DMTC Chair Tony Quick acknowledged John for his “unquenchable energy, vitality, willingness and ability to get involved in the detail of so many of our critical programs.”

There are more details on the University of Wollongong’s website here.

Federal Member for Ryan, the Hon Jane Prentice MP, used a speech in Federal Parliament earlier this year to publicly acknowledge the career of one of the founding fathers of DMTC, Emeritus Professor David St.John from the University of Queensland.

The recognition in Federal Parliament followed David’s acceptance, earlier this year, of one of three inaugural DMTC Fellowships for significant meritorious contributions to the company.

In March 2019  a symposium named in Professor St John’s honour will be held at the international TMS 2019 conference in Texas. TMS brings together more than 4,000 engineers, scientists, business leaders and other professionals in the minerals, metals and materials disciplines.

Stay up to date with our news

Our email newsletters are a great way to keep in touch with news and developments from across the DMTC community. You can subscribe by contacting our Executive Coordinator, Bronwynne McPherson – via contacting the office.

DMTC congratulates Emily Kibble (pictured below), who won the AIDN-WA Young Achiever Award for her work on preventative measures against pathogenic bacteria. The award was presented by the Australian Industry and Defence Network Western Australia this month. 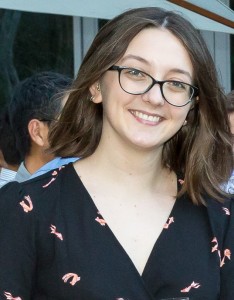 As the Western Australian Young Achiever award recipient, Emily will now be among the contenders for a national award to be announced in February 2019.